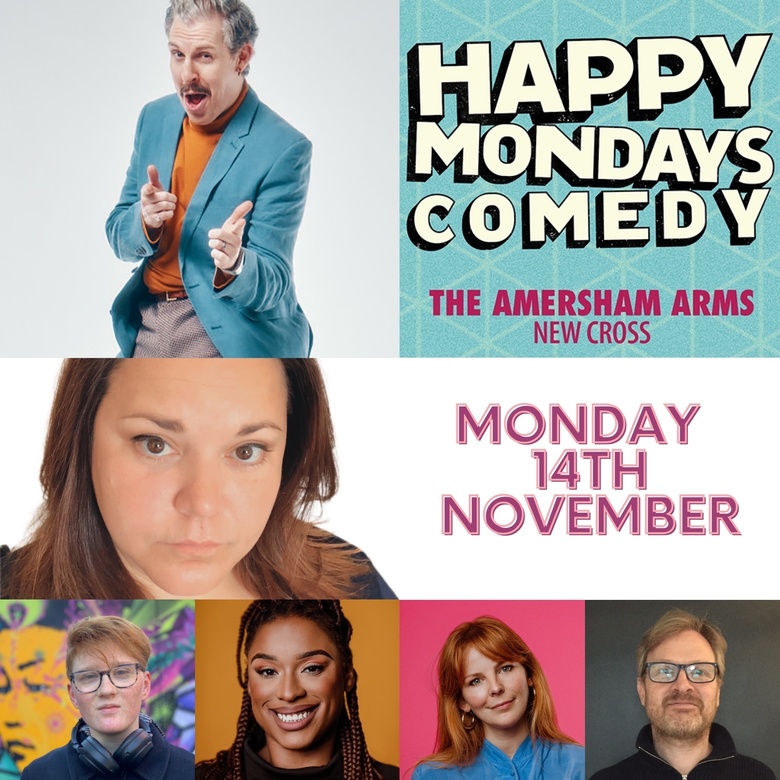 The legendary Happy Mondays Comedy at The Amersham. Kick off your week in style , come hear brand new jokes & fresh ideas from stars of TV, Radio & Stand Up comedy circuit in a friendly atmosphere.

Please email happymondayscomedy@gmail.com so we can reserve you seats together if booking or groups of 3 or more.

Carl Donnelly
South London's finest Carl has been nominated for the Edinburgh Comedy Award twice, won a bunch of other awards, appeared on a selection of TV shows (Mock The Week, Russell Howard’s Good News, Dave’s One Night Stand, Russell Howard’s Good News , Alan Davies: As Yet Untitled etc) and travelled the world having performed at the Just For Laughs Festival in Montreal, The Melbourne International Comedy Festival, The New Zealand Comedy Festival and pretty much every other comedy festival there is.
Co-host of Hit Podcasts including "Two Vegan Idiots’","The Carl Donnelly and Chris Martin Comedy Podcast" & " Babysitting Trev"
'One of the most engaging and bendy-minded comics on the circuit' (The Guardian).
“Observational genius” - The Guardian.
'Connecting effortlessly with his audience… a beautifully balanced performance.' The Scotsman
‘A BRILLIANT SHOW…LIKE CATCHING UP WITH AN OLD FRIEND.’ ABC Radio Melbourne

Suzie Preece
Rising star South London-based comedian and sold out a run at the Edinburgh Fringe 2019 with a split bill stand-up show and won Best British Comedy Series at the Raindance Film Festival.
John Smith
John claims he used to be funny a decade ago but went back to the day job, probably would have been 'cancelled' if he'd kept going. After an extended sabbatical, let's see if he can still make an audience laugh. ( without getting cancelled!)

Ro Dodgson
Ginger haired, 19 year old non binary upstart from London. Fresh from winning the Comedy Virgins Cup TWICE in their first 4 gigs they are here to entertain (& educate) the neurotypical populace on the joys of gender labels & mental health

Margaret De Caires
Hawaiian born, aspiring comedian with stories and observations of swapping one kind of island life for another.
*Hula dancing is not included in the performance.