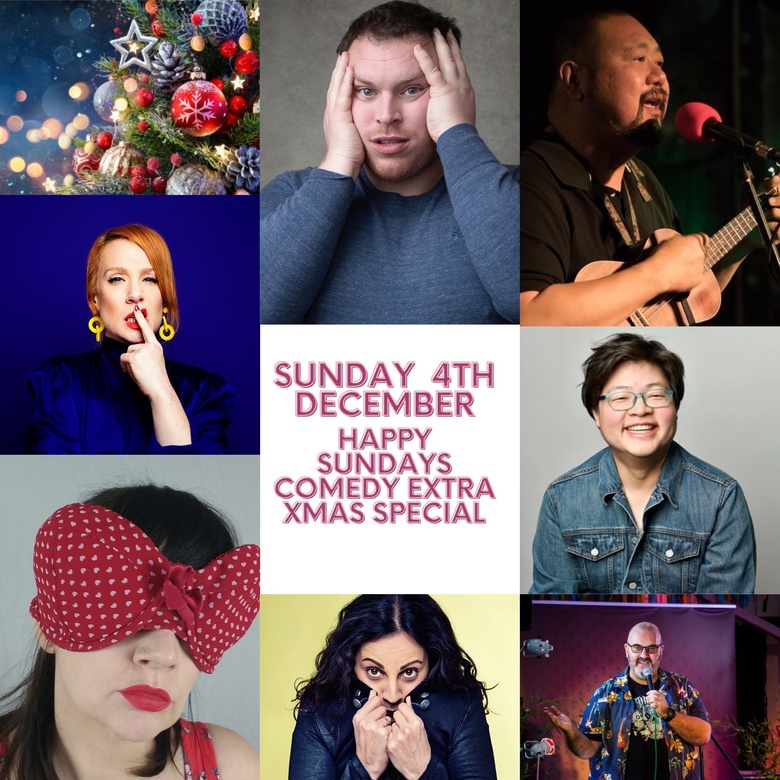 ( May contain nuts etc so please check if have allergies..munch on at own risk)


The legendary Happy Mondays Comedy at The Amersham brings you a Bonus Sunday Comedy show for those who struggle to make the weekly Monday Comedy show! End your weekend in style and come hear brand new jokes & fresh ideas from stars of TV, Radio & Stand Up comedy circuit in a friendly atmosphere.

We bring you fantastic line up of comedy talent for the third Happy Sundays Comedy Extra for a festive special ncluding naturally funny bones of Happy Mondays Comedy's fave Goldsmith's student graduate Pearse Egan ( As seen in new film "In from the Side") Sara Barron- As seen on BBC's Live At The Apollo , Frankie Boyle's New Word Order, Would I Lie to You? & Comedy Central's Roast Battle , Taiwanese comedian now based in South London Kuan-wen , Stella Graham ( "Laugh-a-minute" - Fringe Benefits, Adelaide Fringe) plus brilliantly bonkers Cheekykita providing the lols plus post show live music & singalong from much adored Tony Ukulele all hosted by your cheeky MC Sion James at the ever popular Amersham Arms.

There may be Xmassy tunes , there will be a free mince pie for the first thirty arrivals, plus fun vibes as always!

Please email happymondayscomedy@gmail.com so we can reserve you seats together if booking or groups of 3 or more.

Tickets £8 Advanced £10 Cash on The Door

Pearse Egan
South London based Irish actor, Goldsmith's student & new comedian. Winner - The Blackout at Up The Creek June 2021
As seen in new film " In from the side" & Davina Mcall's ITV show " Long lost family"

Kuan-wen Huang
Kuan-wen Huang is an emerging comedian, writer and actor from Taiwan, with major breakthroughs on the UK circuit in the last two years. Kuan-wen is an alumni of the Soho Theatre Young Company and recently performed at Edfringe.

Stella Graham
Shameless, charmingly aggressive and unladylike, she's the funniest half Sri Lankan gal from Coventry."If you're a TV executive, drop what you're doing and go see her now" - The Skinny

Cheekykita
'loud and bonkers, is an anarchic delight, a funny and endearing character , like Les Dawson and tinfoil put through a new millennium blender' -★★★Broadway Baby.Compared to "Vic Reeves Big Night Out" , 'The Mighty Boosh' and Spike Milligan ★★★★ ‘Like The Mighty Boosh on crack.’Broadway Baby