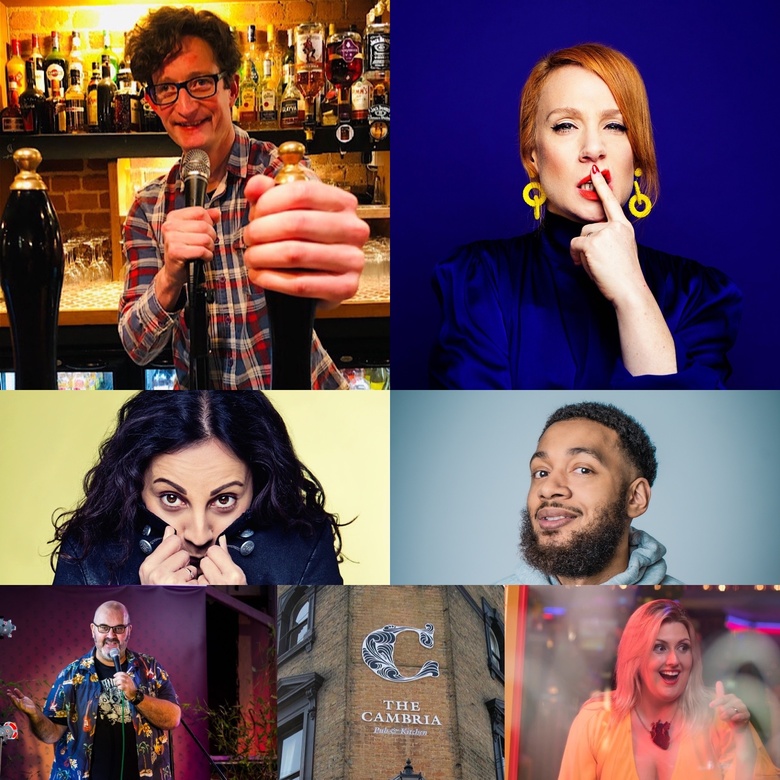 Come Join us at The Cambria for a new regular monthly night of brilliant live comedy.

We have a fantastic line up of comedy talent including the wonderful comedy talents of James Dowdeswell As seen on Russell Howard’s Good News (BBC) & Ricky Gervais’ Extras , Sara Barron- As seen on BBC's Live At The Apollo , Frankie Boyle's New Word Order, Would I Lie to You? & Comedy Central's Roast Battle. , Luke Craig ( Finalist in the 2019 Leicester Square New Comedian of the Year)  , the naturally funny talents of Stella Graham , Welsh girl in exile & host of Comedy Arcade Podcast- Vix Leyton providing the lols, all hosted by your cheeky charming MC Sion James in the cosy friendly atmosphere of The Cambria.

£15 Cash on the door ( Subject to availability- limited capacity so highly recommend booking well in advance!)

Please email sionjamescomedy@me.com so we can reserve you seats together if booking or groups of 3 or more.

For information and group reservations please contact sionjamescomedy@me.com or text 07734805817

James Dowdeswell
Appeared on Russell Howard’s Good News (BBC), Celebrity Deal Or No Deal with Jimmy Carr (C4), Ricky Gervais’ Extras, The World Stands Up ( Paramount Comedy)“James Dowdeswell is a real master of the comedian’s craft.” Chortle.co.uk
James has published a CAMRA recommended book about his love for pubs "The Pub Manifesto: A Comedian stands up for pubs"

Luke Craig
Finalist in the 2019 Leicester Square New Comedian of the Year, Luke draws the audience in with his impeccable wit and stage presence. Topics ranging from his shady characters of Croydon and Lewisham to fatherhood, Craig is surely one to watch out for.
“He is a compelling storyteller, with command of pacing, timing, and the dramatic pause.” – The Evening Standard

Stella Graham
Shameless, charmingly aggressive and unladylike, she's the funniest half Sri Lankan gal from Coventry."If you're a TV executive, drop what you're doing and go see her now" - The Skinny